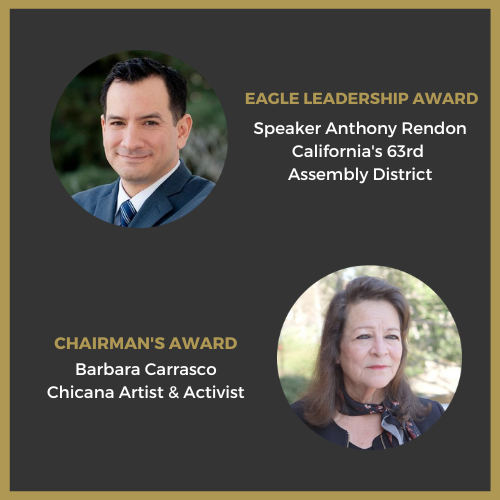 The 67th Latino Leaders Luncheon Series is scheduled to convene on Thursday, November 17, 2022 at The California Club in Los Angeles, CA from 11:30 a.m. to 2:00 p.m. The event will honor Speaker Anthony Rendon with the Eagle Leadership Award and Barbara Carrasco with the Chairman's Award.

Special guest remarks will be delivered by Mayor Eric Garcetti of Los Angeles and U.S. Ambassador to Mexico Ken Salazar.

CLOSED PRESS --- The California Club does not permit working press-onsite. For press inquiries, contact Maritza Huerta at Maritza@TheTwinsPR.com, to coordinate off-site interviews before or after the event.

More on Astro Bug
The Latino Leaders Luncheon Series is convened by invitation-only to provide a platform for prominent Latino leaders to share their personal story of obstacles overcome to achieve success. In addition, it provides a networking opportunity for elected officials, policy makers, corporate executives, opinion leaders, community activists, industry experts, and political insiders. The program includes the presentation of the Eagle Leadership Award to a national leader who has made a significant impact on the lives of Latinos living in the United States. It also features a community partner serving the Latino community.

The Latino Leaders Network is a non-profit-organization dedicated to "Bringing Leaders Together" to establish relationships, build unity, and share our personal stories. Mickey Ibarra, Founder and Chairman, served as Assistant to the President and Director of Intergovernmental Affairs at the White House for President Clinton, 1997-2001.